Shake It Off And Take A Step Up!

*As the capability of a strained body to recover its size and shape after deformation caused especially by compressive stress.
*As the ability to recover from setbacks, adapt well to change or misfortune, and keep going in the face of adversity. 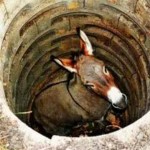 In the midst of the current Nigerian ‘crisis’ and challenges, a positive mindset and resilience is required. Resilience is the foundational key to not only surviving, but thriving. The Donkey in the pit is a very popular story. One day a farmer’s donkey fell down into a well. The animal cried pitifully for hours as the farmer tried to ﬁgure out what to do for his poor donkey. Finally he decided it was probably impossible and the animal was old and the well was dry anyway, so it just wasn’t worth it to try and retrieve the donkey. So the farmer asked his neighbors to help him ﬁll in the well and bury the donkey. They all grabbed shovels and began to toss dirt into the well. The donkey immediately realized what was happening, and he began to bray horribly. A few shovel loads of dirt later, the farmer looked down the well and was astonished at what he saw. With every shovel of dirt that hit the donkey’s back, the donkey would shake it off and step on top of it. As the neighbors and the farmer continued to shovel dirt on top of the animal, he continued to shake it off and take a step up. Pretty soon the donkey shook off the last shovel full of dirt, took a step up, and walked right out of the well and trotted off!

The present condition and crisis in our nation require us like the resilient donkey to shake off the dirt & take a step up. Personally, with the grace and mercy of God, I was able to shake off a lot of things in my life like humble beginnings and poverty. ‘SHAKING IT OFF’ is one of the lessons I learnt earlier in life. I urge you to do same. From time to time, we get knocked down. From time to time, life is going to shovel dirt on you – yes all kinds of dirt. However, what would determine your fate is your attitude. What happens to us in life isn’t nearly as important as how we react. You can turn every adversity into a stepping stone. Just like the donkey, the way to get out of the deepest well or conquer the biggest challenge is never by stopping or giving up but by shaking off and taking a step up. Finally, in the midst of the economic tough times in Nigeria; you can choose to let it define you, confine you, outshine you or you can choose to shake it off and take a step up!

MOTIVATIONAL MONDAY WITH DAN: The Power of Positive Thinking (2)

A Different Kind Of Leader

MOTIVATIONAL MONDAY WITH DAN: The Story Of The Rat Trap In The Farm House

Motivational Monday With Dan: Preparing For The New Week.