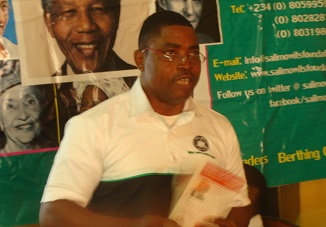 Salimo-Wits hosted the first Leadership club meeting and training for the year on Saturday 22nd February, 2014 in Yaba, Lagos. The focus of the meeting was on goal setting and mentoring. The speakers were ambassador Roland Eyetu  – a quantity surveyor par excellence  and  ambassador Kingsley Ewere – Pastor, author and motivational speaker.

Arrival and registration of participants at the venue started about 12.45pm. The forum moderated by Dare Oladipupo commenced shortly after 1:00 pm with an interactive video session which examined the life of Nelson Mandela ~ his unique leadership qualities, his imprisonment, fight for freedom and eventual enthronement as the present of South Africa. The programme continued with members introducing themselves and telling others what lessons they have learned from the life and achievements of Nelson Mandela. A thrilling chat session on the topic ‘Is Everyone A Leader?’ drew insightful contributions, and comments from the audience and the facilitators.

The first training session titled ‘7 Little known Goal-Setting Tricks’ commenced at 2:45pm, with the facilitator Roland Eyetu outlining the importance of specific, measurable, attainable, realistic and time-bound goals in the life of any youth that desires academic and career success. He guided the participants through seven vital tips and rules that would help them set and realize their short-term and long-term objectives. Also, he advised the youths to dream real big but devise small steps and that would lead to the fulfillment of the dream. He rounded off his session with this statement, “Successful people are very dynamic. They don’t sit on the fence or stand on the sidelines folding their hands and waiting for their circumstances to change. They are not daydreamers. They are risk-takers and action-takers.”

The next presentation on ‘Understanding The Mentor/Mentee Relationship’ was delivered by Ambassador Kingsley Ewere. He spoke extensively on the importance and benefits of mentoring. He defined a mentor as a wise and trusted counselor, a friend, an experienced adviser and role model. He described a mentee as a person who is guided and protected by a more prominent and influential person. Also, he enumerated the different types of mentees or protégées as passive protégée, parasite protégée, prodigal protégée and productive protégée. To wrap up the training session, Ambassador Ewere inspired the audience with these words, “Ordinary teachers teach, but a mentor inspires you to become all that you have the in-built capacity to be.”

The second stanza of Nigerian National anthem was unveiled as the official anthem of the Salimo-Wits Leadership club. In a closing charge, the founder and president of the Salimo~Wits Foundation Dan Ekoko encouraged the youths of Club SLI with these words “The journey of a thousand miles begins with one single step. Don’t be in a hurry to realize the goals you set for yourself. There will always be difficult challenges on the road but don’t give up. You will get there. The life story of Joseph in the Bible is instructive to every youth. The Nigerian youth of today must know that small dreamers can only occupy a small place in the world. Therefore, dream big. See beyond yourself. Envision a big, better and brighter future for yourself. Be patient like Joseph and in the end, you will achieve it.”

Salimo-Wits Leadership Initiative which is committed to raising visionary, sacrificial and servant leaders organizes inspirational leadership meetings and trainings to re-orientate and re-engineer the mindset of Nigerian youths. The next forum with the theme: ‘Personal Growth’ is scheduled for June 2014 alongside other activities.